Best Saltwater spinning reels are a lot of fun to use and are effective for catching the majority of saltwater fish. In comparison to conventional reels, these reels are frequently referred to as light tackle. As a result, it is critical to have the proper size spinning reel.

Small reels are ideal for reef and flats fishing, where the ability to feel the fish bite is critical. When offshore fishing, the reel should be large enough to handle wahoo, tuna, and mahi-mahi. Certain spinning reels are even capable of catching yellowfin and Bluefin tuna.

Penn, Shimano, Okuma, Quantum, Diawa, and Van Staal are just a few of the great companies that manufacture saltwater spinning reels. It is customary to use a spinning reel with what Bait runner does when surf fishing. Baitrunner reels are sometimes referred to as live liner reels or bait feeder reels.

Today, a rubber section on the inside of the spool is standard on many spinning reels. This provides a secure grip for a braided line on the spool. Without this braided line, the line can slip into the spool, making it extremely difficult to reel in a fish. When fishing in the ocean, I typically use an 80-pound braid or 30-pound monofilament on spinning reels.

There are numerous other branded options available, but we’ve narrowed it down to the best Top 4. 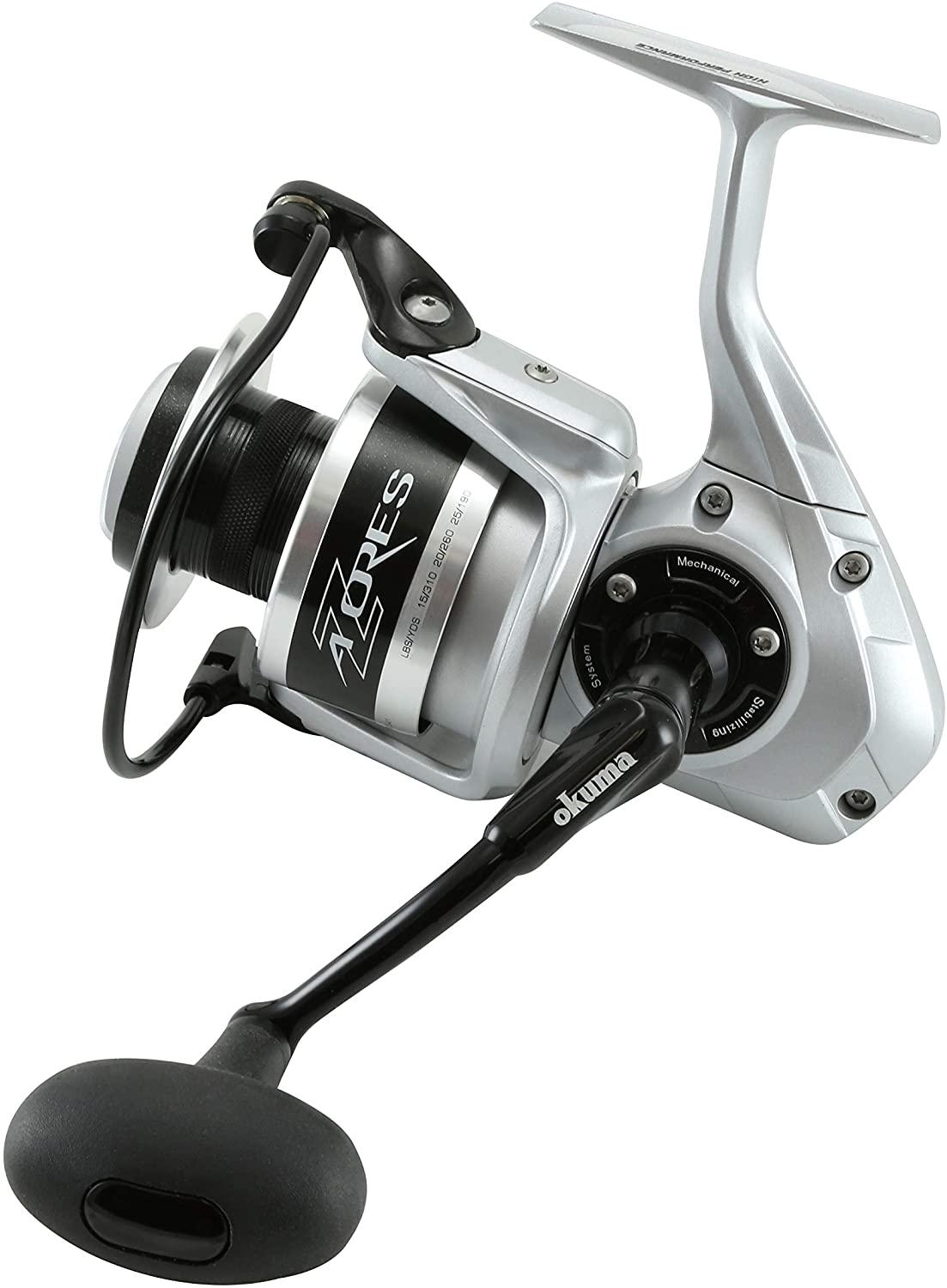 Features machine-cut spools that are double-anodized for increased line capacity while keeping the body compact.

The Propulsion Line Management System allows the boat to be cast farther and prevents wind knots and backlashes.

Constructed for heavy-duty fishing from a boat or ashore, and trusted by charter captains worldwide. Our new IPX6 Sealed System on the Slammer III reels keeps water out of the gearbox and drag system.

The Penn Slammer III series of offshore fishing reels are a popular choice for charter operators and serious recreational anglers. A full metal body, an IPX6 water-resistant sealed gearbox, a sealed Slammer drag system made of Dura-Drag material, and a 7+1 stainless steel bearing system are included as features. Additionally, the 6500 and 7500 sizes are available in high-speed models that retrieve lines at 48 and 50 inches per turn, respectively.

The Slammer III 10500 holds 540 yards of braided line rated at 80 pounds. Additionally, it has a maximum drag of 60 pounds and a rigid metal frame. As a result, the Slammer III series is among the best, if not the best, spinning reels for catching large pelagic fish such as yellowfin and bluefin tuna.

It has an IPX5 sealing system, so if it gets hit by a wave or if it is left to swim in the spray for a while, you won’t need to fret about saltwater getting in. The PENN HT-100 drag washers are completely sealed to provide the stopping power required for large saltwater fish. Under heavy loads, a full metal body and side plate keep the CNC gear system precisely aligned.

Saltwater reels like these Okuma Azores spinning reels offer excellent performance on the flats, reefs, and offshore big game fishing. One point to note is that some reel sizes are specified in terms of mono-line capacity in the listing.

Dual force drag utilizes both felt and carbon fiber washers to create a drag that is strong, smooth, and precise in its adjustment.

6+1 high-performance ball bearings, an anti-reverse system, a knurled spool for braided line, a rigid aluminum body, an aluminum rotor, a machine-cut aluminum handle, and a strong oversized main shaft are just a few of the features.

The Okuma Azores is perhaps best known for its dual force drag system. Pressure is distributed evenly with a very smooth drag when felt washers are combined with a secondary carbonite washer underneath the spool. The combination of felt and carbonite washers results in a drag of 28 pounds on the Azores Z-40s and up to 44 pounds on the Azores Z-90s.

When it comes to the Okuma Azores line’s actual performance, anglers will appreciate the presence of a few consistent features that make these reels a joy to use. To begin, all internal and external components are machined and anodized aluminum that has been coated with a corrosion-resistant coating.

Not only do these reels come in five different sizes, but they also perform consistently and are a breeze to install, maintain, and use regularly.

Those with the best saltwater spinning reels are constructed of premium metals such as stainless steel, aluminum, and brass, and have machined frames made from one piece.

The reels can be chosen from slow-speed reels for bass and redfish, fast-speed saltwater reels for game fish, or even two-speed reels for recovering a slackline if a fish makes a quick turn.

The best spinning reels are available for use with monofilament lines, braided lines, or both, and come in a variety of lengths and test strengths.

This helps keep salt out of internal components that cannot be thoroughly rinsed with fresh water. Corrosion-resistant materials should be used in the construction of saltwater reels.

During a fishing trip, reels are splashed and the wet line fills the reel with saltwater. It is critical to rinse the reels thoroughly with fresh water after each trip.

Saltwater reels must be robust and rigid to handle large fish. The reels must be appropriately sized for the species of fish being targeted. A properly sized saltwater reel will have an adequate drag value and line capacity.

Which spinning reel size do I require?

Spinning reels are typically sized in the thousand to ten thousand series. There are three primary factors to consider when sizing a fishing reel.

The reel’s capacity for a line is the first consideration. A reel in the 1000 series can hold approximately 100 yards of a 6-pound monofilament line. A Penn Slammer 10500 spinning reel has the largest line capacity currently available, holding 540 yards of 80-pound braided line.

The second factor is the spinning reel’s maximum drag rating. The maximum drag value is critical to consistently add resistance to the fish. This enables the line to be pulled with a constant force less than the line’s strength. Although it appears to be a simple concept, it is quite common for people to use drag above the line’s rated value.

This can result in the line snapping when a large fish is caught. Never set the drag to more than 50% of the total line strength. Generally, the drag should be set to 25-30% of the strength of the fishing line. This helps to explain why the line strength decreases at the knot. Additionally, if a fish makes a rapid burst, the system’s drag may exceed the set value.

Which spinning reel is capable of holding the most line?

The majority of spinning reels are available in a variety of sizes. The amount of line that a fishing reel can hold varies according to the size of the spool and the diameter of the line. Braided line is more delicate than monofilament line.

This means the spool can accommodate a greater amount of fishing line of equivalent pound test. The Penn Slammer 10500 is the largest spinning reel available, holding 540 yards of 80-pound braided line. Such a large spinning reel is capable of catching large sharks, marlin, and tuna.

Can any reel be used in saltwater?

Yes, technically, any reel will function in saltwater. However, if the reel is not designed for saltwater use, the internal components are likely to corrode.

As a result, the ball bearing, drag, or gears will fail much more quickly than expected. Numerous freshwater spinning reels are constructed of graphite, which is impervious to corrosion.

The issue is not with the reel’s exterior, but with its internal components. Gaskets are used on saltwater reels to protect critical components from corrosion.

What factors should I consider when purchasing a saltwater spinning reel?

Numerous factors must be considered when selecting a spinning reel. To begin, there is the spinning reel’s size. It should be large enough to hold enough lines to catch the desired species of fish.

The second factor to consider is the amount of drag. Smaller fish require less drag, while larger, stronger fish require more drag. The 7500 series is the best size saltwater spinning reel in my opinion.

The Penn Spinfisher VI 7500, for example, is capable of catching offshore fish such as mahi-mahi, tuna, and wahoo. Additionally, it can be used inshore to catch snapper, mackerel, grouper, striped bass, and tarpon, among other species.

The reel is capable of holding 400 yards of the 65-pound braid while remaining compact enough to fit on a medium-weight spinning rod with good action and sensitivity.

The use of light tackle can be helpful when targeting yellowtail snapper, sea trout, grunts, porgies, and triggerfish on the reef, inshore, or in deep water. If the tackle is too large, it is difficult to detect the presence of small fish on the line.

Even small fish can pull drag and be enjoyable to catch when using light tackle. This is particularly true for children and novice anglers.

The primary distinction between saltwater and freshwater spinning reels is the presence of corrosion-resistant components and sealed components.

Saltwater reels’ frames are typically made of a more rigid material to withstand greater forces being applied to the reel. Additionally, saltwater reels come in larger sizes.

It is recommended that you use a reel that is appropriately sized for the species of fish being targeted. For instance, targeting bass with a 7500 series reel spooled with 400 yards of 65-pound braid makes no sense.

Reels for Saltwater vs. Freshwater

The following are the reasons they should not be used interchangeably:

Saltwater reels are typically constructed of corrosion-resistant materials such as stainless steel and feature solid bodies. This reduces the likelihood of significant damage to its internal components. Freshwater reels lack this level of protection because freshwater is less corrosive than saltwater.